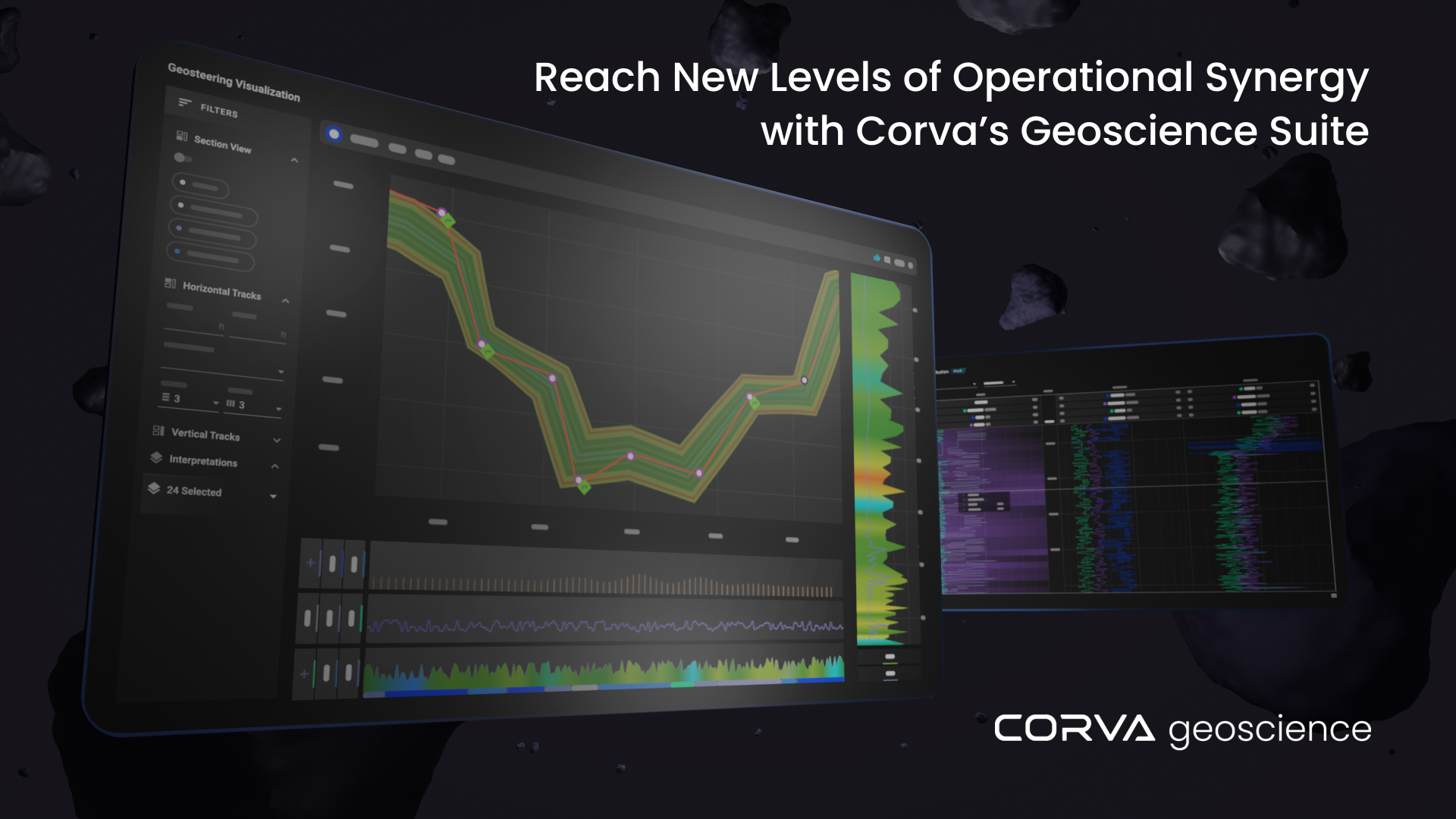 Many long-standing industries, such as energy, have had to adapt and change constantly over the decades as new technologies arise. And if these changes are met with resistance, a variety of inefficiencies can come up. However, energy isn't alone in this struggle, as many different industries have experienced similar challenges. For example, let’s look at how advertising and geoscience industries compare with adjusting long-standing processes to gain efficiencies.

In the mid-1900s, a previously unrecognized issue came to light within advertising: writers and designers were separated from one another, despite how much their actual work overlapped. This might make some sense at first–while they do work on many of the same things, their actual jobs are very different. But this separation created many unnecessary workflow blockages and limited communication.

Agencies began to notice these growing inefficiencies and sought a new approach to fix this. Thus, the now ubiquitous writer-designer pair was born, allowing for a better exchange of ideas and information. This ultimately led to the advertising renaissance of the mid-1900s, spawning what became known as the ‘Mad Men’ era.

But how does this relate to Geoscience?

Effective drilling operations require equally effective geoscientists working behind the scenes to identify and evaluate rock composition with incredible precision. In other words, geoscientists lay the literal groundwork for the driller, while the driller takes the plan to action.

Just like the writer-designer pairs of advertising, they work as two sides of the same coin, despite their jobs having very different functions on the surface. And like the old advertising world, the energy industry has maintained a certain distance between the two roles, creating limitations when efficiently communicating crucial information.

Corva’s new Geoscience Suite aims to be a solution to this problem by easily putting the driller and geoscientist side-by-side to make the flow of data between them faster and more effective than ever before. 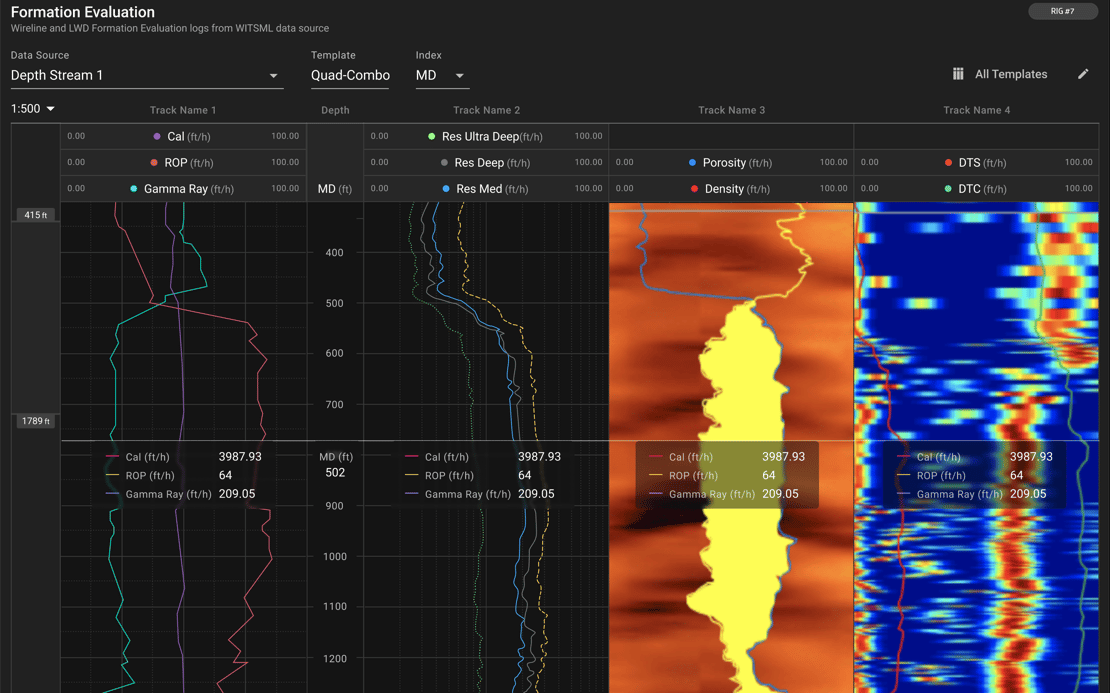 The first app within the Geoscience suite is our Formation Evaluation app, which equips your entire team with powerful visualizations of geological, petrophysical, and other depth-based data.

The app displays tracks for depth-based data using one of Corva’s out-of-the-box log templates for common logging tool suites, such as triple, quad combo, etc. You’ll also be able to build and share custom templates to match their specific requirements by adding tracks from available real-time data sources or uploaded log files with the ability to combine both types in a single view. 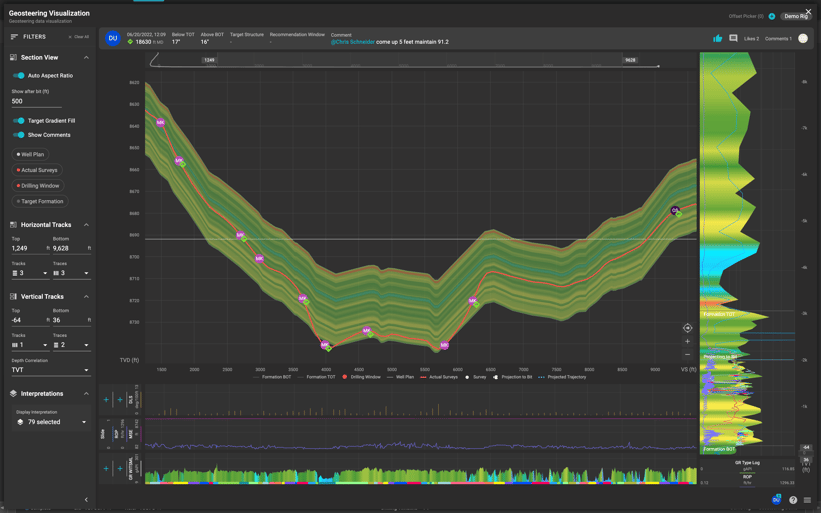 The Geosteering Visualization app simplifies the geosteering process and streamlines communication between key players on the rig.

Corva’s Geosteering Visualization app solves this problem by bringing everyone to the same data stream, and providing live access to current and archived historical well information. Each stakeholder, from drilling engineers to geoscientists, will have on-demand access to the same information, with any recommendations and comments captured in real time.

This app allows you to better understand and change plans in real time, and make effective, real-time decisions during drilling operations such as course corrections on-site. 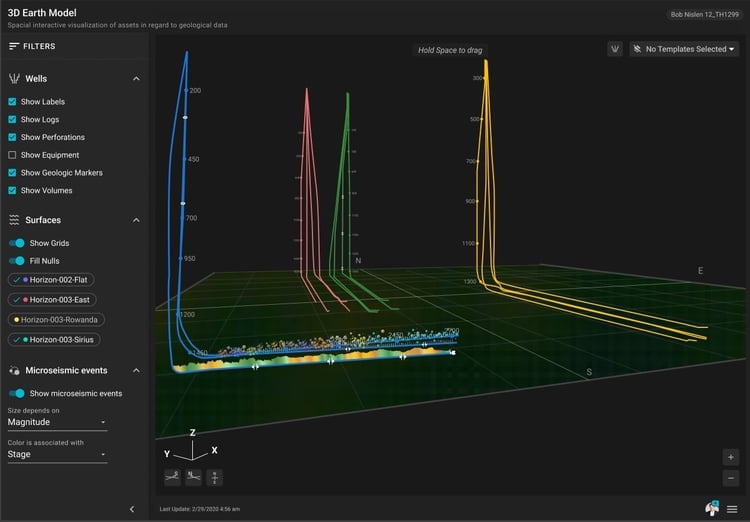 The 3D Earth Model app is our newest addition to our Geoscience Suite. It powers up how your team visualizes their seismic and drill stem test data and allows them to view multiple operations at the same time, well to well or pad to pad.

Drilling teams will manage more wells with less manpower as the app displays the most relevant well and drilling-related data in an interactive 3D form. With an industry-leading user experience and interface, understanding data from multiple wells at the same time will be easier than ever before, bringing the whole operation together for optimal efficiency.

What’s on the Horizon: Looking to the Future of Geoscience

We have big plans to expand our Geoscience Suite, with many new apps currently progressing through our development pipeline. Two such apps are our Gun Barrel and Well Correlator apps, which we plan to release this year.

The Time to Targets app will provide Geologists and Drilling Engineers with key information related to when certain targets are planned to be reached. It also offers improved insights with the ability to automatically compare planned and actual formation tops time information.

The Well Correlator app will allow users to select and view multiple wells in a single interface to analyze different formation depths and specific hazards. This reduces the need to use multiple third-party software packages by bringing the most relevant information into the Corva platform, allowing for effective cross-communication between the Driller and Geoscientist with a variety of other apps.

Bridging the Gap Between Drilling and Geoscience

One of the leading issues seen by geoscience teams within the energy industry is the back-and-forth created between themselves and engineers as a result of outdated and inefficient communication methods.

Taking a hand from the playbook of old advertising agencies, Corva seeks to eliminate these issues with our robust Geoscience Suite, leveraging our easy-to-use UI, robust visualizations, and real-time data streams to ensure each working group is looking at, and using the same data.

By bringing drillers and geoscientists together, we’re creating our own energy renaissance and reaching new levels of drilling operational synergy. To learn more, schedule a demo today!