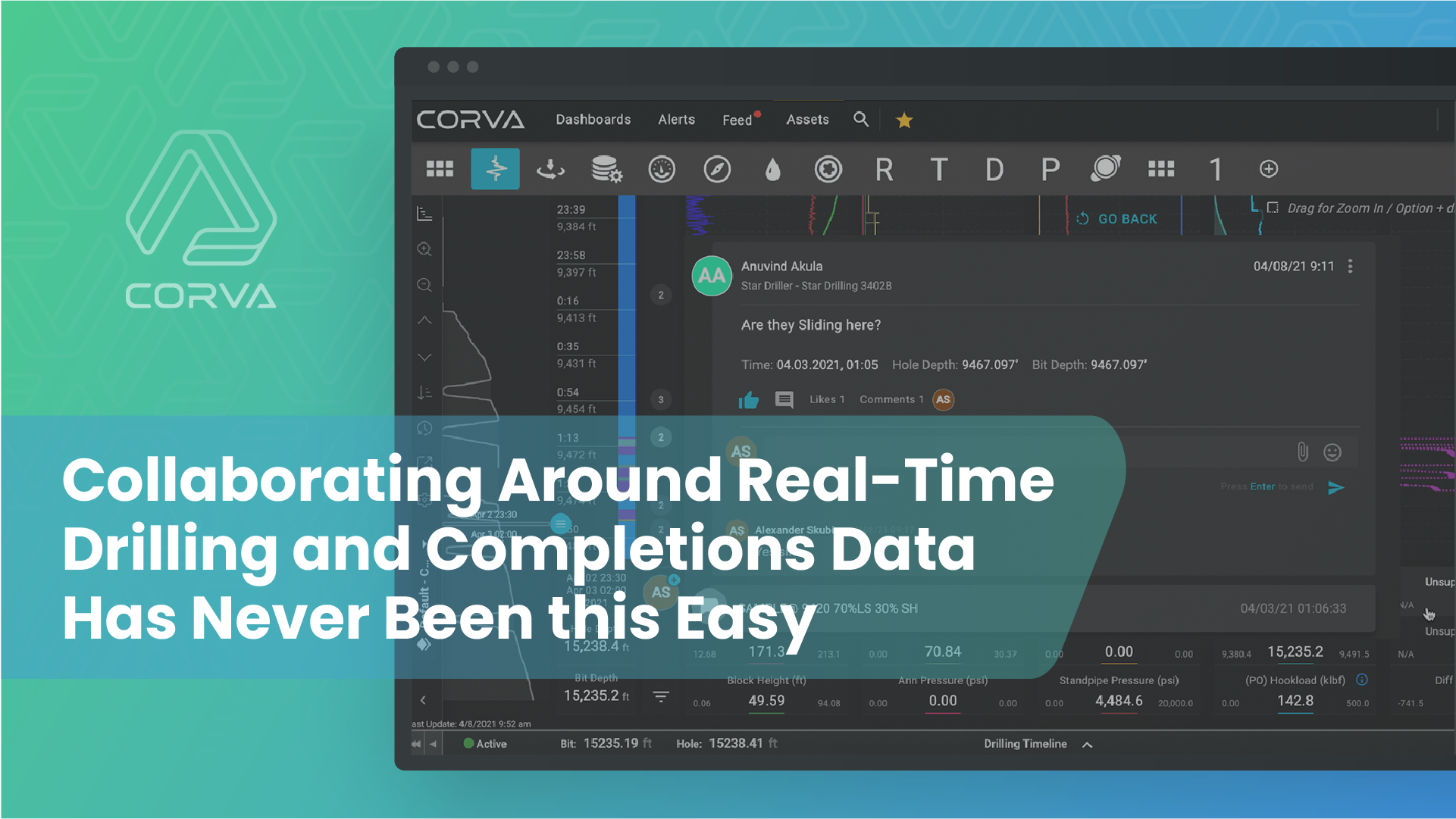 We often talk about the torrent of data flowing in from the rig and your WITSML stream is where a lot of time is spent drinking from the firehose. Staring at traces all day, sifting that stream for insights from real-time drilling data is tedious work, and looping others in to troubleshoot can be a real fire drill. On the completions side, the firehose nozzles up with a hundred or more data channels flowing in the red zone, not to mention offset data. Don’t panic – Corva’s got the perfect drilling and completions apps to tackle traces and monitor treatments, inform decision-making, and power up teamwork.

Our real-time Traces app is heavily relied on daily by most of Corva’s clients to analyze live rig data streams. It enables users to easily visualize raw WITMSL data alongside the Corva model calculations, offset wells, and even data created by teams in Dev Center. Corva’s Treatment Plot app automatically detects operational activities and displays key components in the hydraulic fracturing treatment for single or multiple stages, active and offset wells. Transform the torrent of data from the frac van into an easy-to-navigate visualization and plot a wide range of parameters, including breakdown pressure, the start of rate, the start of proppant, and ISIP within each stage.

One of the toughest challenges for drilling and completions data analysis is solving the big operational picture puzzle. Teams are bombarded with information from every direction. Sidebar conversations occur separately from monitoring and analysis. The effort is duplicated because onsite personnel and remote engineers and geoscience are all trying to solve the same problems disconnected from each other and the data. Teams need context.

The Corva Feed is where drilling and completions data is put in powerful context alongside related comments, photos, and even video in a familiar social media style interface. Teams can easily center their conversation around an asset with everything associated with it displayed in context, including alerts, nonproductive time, operational notes and summaries, daily cost, BHAs, driller’s notes, well plans, survey stations, fluid reports, and other documents.

Corva has also taken the ability to comment on data directly to apps to extend the context further. As with all of Corva’s apps, we’ve steadily enhanced the Traces and Treatment Plot apps since their debut and putting data in context is a recurring theme for both.

Traces has recently been upgraded with a raft of powerful new features in response to the needs of our clients. At the top of that list is integration of comments and the Corva Feed with Traces. Users can now drop a comment anywhere within the viewer and tag team members, which instantly updates the Feed timeline for the associated asset and alerts anyone who has been @ mentioned. Respond and keep the conversation going. Another big addition to Traces is the ability to quickly view BHAs, fluid checks, surveys, and operation notes/summaries directly in the vertical track of the app.

Traces has some great new usability updates, including the ability to zoom into a trace track by clicking and dragging the cursor, then zoom out with a click. Dive deep into the data and zoom all the way down to do a post-mortem on the split-second actions of the well. Zoom all the way out to see days of data at once for trend analysis and optimization. We’ve also added a visual alert too that warns users when values fall outside the user-defined window by turning the track header yellow or red. Finally, users can now create custom templates so that a specific set of traces can be easily shared with the entire team. Create a different template for every operation to save and share your most used views when the rig switches back and forth between drilling, tripping, and completion activities.

The largest of the updates is under the hood and behind the scenes. We’ve teamed up with the industry’s largest WITSML providers to provide true 1-second data streams via WITSML.

The largest of the updates is under the hood and behind the scenes.  We’ve teamed up with the industry’s largest WITSML providers to provide true 1 second data streams via WITSML. Couple that speed with Feed, Templates and all the other new features, and you’ve got a deadly traces app that helps you nozzle down the firehose stream and start soaking in the insights of Real-time data.

While zipper fracs maximize treatment outcomes and productivity they also pose a threat to offsets on the same pad through dangerous interwell pressure communication. Fracturing teams need real time tools to safely push the pressure envelope while keeping an eye out for the conditions that lead to frac hits on neighboring wells.

Corva has been listening to what users have been asking for. Monitoring and visualizing offset well pressures is now seamlessly achieved in the Treatment Plot app.

Track potential communication between wells on the same pad to ensure zonal isolation and cementing integrity. Plus, customizable alerts enable your team to monitor by exception and jump in the decision loop when action is needed.

Recent updates to the Treatment Plot app also include comments and the ability to view them while hovering on real time values. Notes and best practices are now captured directly in the app and pushed to the Corva Feed to put fracturing data and insights in context with the larger operational picture, providing completions teams unprecedented capabilities to collaborate around a single real time version of the truth.

Couple the new Traces and Treatment Plot enhancements with the Corva Feed and your team has a killer set of apps to nozzle down the firehose stream and start soaking in the insights of real-time drilling and completions data.